My cousin goes to more than one Countdown
To spend her benefit on water and apples
For Ihumātao, she picks me up from Manukau
And tells me she was standing with her mate
And her mate said what are those Pākehā doing here?
As they watched them build a barricade out of supermarket trolleys
My cousin laughs and tells her to leave them be
So they can get arrested first

She says I should come out to Ihumātao
But I offer to babysit even though the kids want to go too
She says, ‘Don’t you write about that kind of thing cuz?
It would be good for you to see it’, but I’m still
Just trying to be it plus I might see someone I know

I ask her who Aunty Coggy was, who was Aunty Bang?
She says Aunty Coggy lived in the house by the first bend
In the river after the tracks, oh I know that house
The one that’s grey, uneasy and tagged to bits

I want them for us too, these tūpuna waving sparklers in the sky
And the great turning she walked into the water for last October, the gears
shifting down as my father died and the moon turned into a lotus for her

I send her the thumb emoji becuase I could do more but she is, she is

LISTEN to ‘Being Active’ by Talia Marshall 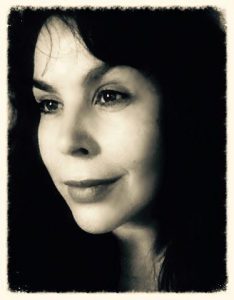 Talia Marshall (Ngāti Kuia/Rangitāne o Wairau/ Ngāti Rārua/Ngāti Takihiku) is a Dunedin based writer who is currently working on a book of essays tentatively titled Boy Crazy and a slim volume of verse with the equally tentative title of Bad Apple.