Those people back down the hallway snoring
twenty years ago were your parents.
Now they are you.

Those people in lounge chairs fumbling
for their glasses with ailing hearing.
Yes, them too.

That’s them alive again
on the draughts of your snoring,
in the creak of your knees as you weed

among the leaves of spring spinach.
Look, too, at that flame from the orange tulips
sprung out of the ground beside the mountains –

a daughter planted to remember a father.
There we go driving back into the past
in that old car with no seatbelts & inadequate

brakes. There you go to collect the milk bottles
on the frosty gravel path long before you were
aware of the human ailment of snoring.

Now lie down & listen for the symphony
of snoring. There you are, turning your back
on the conductor, but among the great chorus 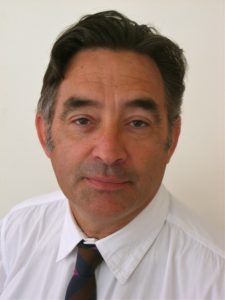 Richard Langston is a journalist and television director who works for New Zealand’s longest-running programme Country Calendar, a prime time weekly broadcast about rural life. He is the author of six books of poetry, Boy, Henry, come see the blue, The Newspaper Poems, The Trouble Lamp, Things Lay in Pieces, and Five O’Clock Shadows. His poems have appeared in Dear Heart - 150 New Zealand Love Poems, Dear to Me – 100 New Zealanders write about their favourite poems, and various literary journals including broadsheet. They have also featured in the Poetry Poster series sponsored by Phantom Billstickers. He grew up in Dunedin and was editor of Garage, a fanzine published in the mid-1980s and devoted to the Flying Nun music scene in that city.

Langston comments: ‘I spend a lot of time staying on farms in my job and often share accommodation with the film crew. For years I was under the impression I was not much of a snorer, but this turns out to be more the result of a tolerant and understanding partner than any reality. The first time I slept at close quarters with my work colleagues they let me know I was a snorer, quite a loud one in fact. As undignified and annoying as it can be, snoring is also comedic – think of the snorers who are so loud they wake themselves up in a splutter of snorts and grunts. As a teenager, I also remember snoring sounding behind closed doors. So there’s the link between snoring and memory, and the impetus for the poem.’