You look at me plastic
‘Why don’t you have a malu?’

Pfft:
the memories of my ancestors
and stories of their villages
are not tattooed on my skin
because I am no kin
to pālagi parlour needles
nor do I feel I have earned the tap-tap-tap
of the sausau mallet on the au
– the fine-tooth comb of bone –
held in the sacred lima of a tufuga.

I have no desire for my body
to advertise pepelo
to billboard bullkaka
to grandstand airs
for show
for fashion
for Likes.
I have no need for my tino
to house my mana
in a sham temple
like you.

LISTEN to ‘Mā’ by Ria Masae 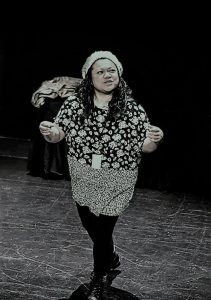 Ria Masae is a writer, poet and spoken word artist of Samoan descent, born and raised in Tāmaki Makaurau. Her work has been published in literary outlets such as Landfall, takahē, Poetry New Zealand Yearbook, Tarot Poetry, Snorkel, and Best New Zealand Poems 2017. She has won writing competitions, such as the New Voices: Emerging Poets Competition and the Cambridge Festival Short Story Competition. Her poetry featured in stage productions, such as Upu Mai Whetu: Mea Fou and Between the Pages. In 2018, Ria became the 'Going West Poetry Slam' champion, and in 2019 she was a recipient of the 'NZSA Mentor Programme'. In 2020 a collection of her poems, titled 'What she Sees From Atop the Mauga', was published in, AUP New Poets 7. Ria is currently working on her first solo poetry collection.

‘"Mā" is my retort to real-life experiences, mine and others, who have been told in one way or another that we're not Samoan/Tongan/Māori, etc, enough. It’s bad enough that many Polynesians endure racism from other ethnicities, but to be belittled by our own people is frustrating, to say the least, and doesn’t add to building up our culture as a whole.

‘Every individual connects to their culture in different ways, in different measures, in different cycles. Language and skin colour aren’t the only ways to relate to culture. The importance is respecting the various types of connections, as well as connecting with each other. Nurture the culture by supporting those who contribute to it in their own unique ways.’