Off with your head and on with a button

Was he really just joking? Orepuki’s
baker with the large sharp knife,
when he’d say to my mother, a little girl at the time,
‘Off with your head and on with a button.’
My mother didn’t believe so,
and for years after held a fear of knives.

When she died she left behind photos,
recipes, keepsakes, memoirs, letters …
In her address book I found a faithful record
of the whereabouts of family and friends
with a line drawn through any names
of those who were dead
or who had divorced her children. 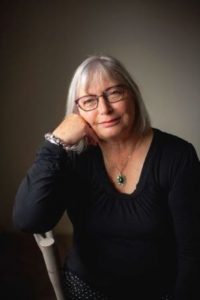 Kay McKenzie Cooke (Kai Tahu, Kāti Māmoe, Ngati Kahungunu) lives in Ōtepoti Dunedin. She is a retired early childhood teacher and is grandmother to eight grandchildren. To date she has published four collections of poems. Her first collection, Feeding the Dogs published by Otago University Press, won the Jessie McKay Prize for Best First Book in 2003. Her fourth book titled, Upturned was published by The Cuba Press in 2020. As well as poems set firmly south of the south, this collection also includes the poet’s reaction to visits made to the city of Berlin where her son and his family live. Her poetry was included in The Second New Zealand Haiku Anthology. Her work has also appeared in a number of anthologies and literary journals and magazines, both national and international, including: Takahē, New Zealand Listener, Sport, JAAM, Trout, Glottis, Cordite, Shenandoah, Canopic Jar, Journal of Katherine Mansfield Society and Landfall. She has collaborated with fellow Ōtepoti Dunedin poet Jenny Powell to create 'J&K On The Road', a project to discover and promote poetry in the rural areas of New Zealand.

Cooke comments: 'In her later years my mother told me about her childhood memory of the unfriendly baker. I could visualise it perfectly. Largely because her hometown of Orepuki in Murihiku Southland was also my hometown. In my mind I was able to pinpoint the exact location of the small bridge (long gone now) across a gully where one day she met the baker returning (or going) to his shop. I could smell the freshly baked bread on his clothes. I could hear his gruff threat. I imagined a sheathed knife at his waist and a basket of bread on his head - most probably the basket on his head coming from my memory of Mr Baker as depicted in Happy Families playing cards. As soon as I heard Mum say the words, "Off with your head and on with a button," I knew it would be the title of a poem. I didn’t get around to writing it until after my mother had died. As I wrote the poem, I instinctively aimed for a plain, straightforward tell. As I wrote, I remembered my mother’s fear of knives, which for some reason was something she didn’t mention when relating the story of her encounter with the baker. The poem emerged fully-formed, surprising me when it seamlessly, subconsciously made a direct link to what I had, with some amusement, discovered in my mother’s address book.'