In the corner shop there are no shoes to compare;
I like the old guy well enough but his business ones pinch.
Besides, I’m an artist. Red leather, blue suede.

My Uncle Bill used to make them. I want a pair
from the summer of 1969, when he was happy.
They will be my dancing shoes. The buckles must shine. 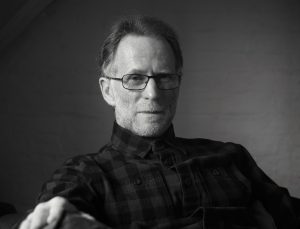 David Howard is the author of Rāwaho: the Completed Poems (Cold Hub Press, 2021) and the editor of A Place To Go On From: the Collected Poems of Iain Lonie (Otago University Press, 2015). He held the Robert Burns Fellowship at Otago University (2013), the Otago Wallace Residency (2014), a UNESCO City of Literature Residency in Prague (2016), the Ursula Bethell Residency at Canterbury University (2016), The Writers’ House Residency, Pazin Croatia (2017), the Grimshaw Sargeson Residency (2018), a UNESCO City of Literature Residency in Ulyanovsk (2019), and a Creative NZ Resilience Grant (2020).

Howard comments: 'If a writer tries only to write, the work will soon become desiccated, a skeletal leaf. There are many other things that are worth doing. But writing, while it respects the everyday world, is not governed by it. And neither is any person who wants to grow for the whole of their lifetime so that, finally, life seems whole. A vision requires uncommon desire.

'My Uncle Bill was an ordinary man who did something extraordinary. At 19 he became "Mr New Zealand 1956". But the poem does not pivot upon this detail because memory does not need a superhero. Bill spoke softly, his Scottish accent felt like the suede he preferred to work with once he trained as a shoe designer. His language was plainer than a pair of winklepickers; it was plain as the poem that is dedicated to him.

'The tone of "Fitting" is personal without being confessional. The pronoun "I" is distant, consistent with the model of Ben Jonson's occasional poetry. The demotic vocabulary is not casual - or rather, it is properly casual; remaining respectful, it does not presume to get too close. Yet there is compassion and that measured love we call regret. Still, the buckles must shine. I hope they do for you.’