I brought plain white knickers to the undertaker with my
mother’s clothes. And now I wonder if he struggled her
into them or tossed them knowing we would not rifle
through?

Thinking about my corpse. Thinking about the sweet
smell of lilies, and flies and Walter Mosley’s Pet Fly and
how he used it as a metaphor for his own internalised
self hatred.

Thinking about my corpse. How Samuel Pepys clutched
the corpse of Queen Catherine of Valois, pulled her dry
sticks toward him and kissed her lips.

Thinking about my corpse. How generous the wet sack.
And moisture. Bag of dissolving hope. How no one
will lift me to their chest.

Thinking about Marlon Brando in Missouri Breaks
dragging the corpse from the coffin by the lapels. Ice
scattering. The terror of the bystanders. 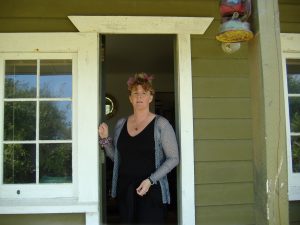 Wes Lee lives in Paekakariki. Her latest poetry collection By the Lapels was launched in October 2019 (Steele Roberts Aotearoa, 2019). Her work has appeared in a wide array of literary journals and anthologies in New Zealand, Australia and the UK, including Westerly, Landfall, Poetry New Zealand, Poetry London, New Writing Scotland, The London Magazine, The Stinging Fly, Silence: The University of Canberra Vice-Chancellor's Poetry Prize Anthology 2019, The New Zealand Listener, Australian Poetry Journal. She has won a number of awards for her writing including The BNZ Katherine Mansfield Literary Award, and The Bronwyn Tate Memorial Award. Most recently she was selected as a finalist for The Sarah Broom Poetry Prize 2018, and awarded the Poetry New Zealand Prize 2019 by Massey University Press.

Lee comments: ‘The poem sprang from a number of sources/ images/ memories, both filmic and personal.

‘My mother died suddenly and there was no chance to say goodbye or experience the “deathbed scene” that is so often shown in the movies. I was not with her on the afternoon of her death, or over the three days when she was undergoing her post-mortem; travelling around in an ambulance, her body jiggled and shaken and unaccompanied.

‘On the day of the funeral, my own family joked about the potential for me to be a “coffin jumper” as we sat in the anteroom to the funeral parlour. (Perhaps they saw something in my eyes.) And I wholeheartedly identify with those who have leapt into the coffin at the graveside wanting to follow that which has been lowered.

‘When we were finally let in to the parlour I remember I could not wait to see my mother. I felt no sense of trepidation that is often shown in the movies (the slow approach toward the coffin). I ran to her and all else disappeared in an almost psychedelic blur (a whirl of light and eternal burning candles and darkness and velvet blackout curtains). A moment of intense connection, an almost out-of-body experience.

‘“By the lapels” stems from imagining the transgressive act of puncturing this decorum, the hushed, suffocating silence of the (“traditional”, western, Pākehā) funeral parlour.

‘The protocols in place that strive to keep demonstrations of intense feelings at bay (the desire to rip open the clothes and trace the post-mortem scar; to peel back the eyelids and witness the undertaker’s plastic eye caps; to see everything; to “coffin jump”).

‘I had always been entranced with a diary entry by Samuel Pepys describing how he kissed the mummified corpse of Queen Catherine of Valois on his birthday (it seemed even more beguiling that it was on his birthday). His embrace of the decayed, mummified corpse, kissing her lips, which might seem outrageous and abhorrent to us in the 21st century:

“... and I had the upper part of her body in my hands, and I did kiss her mouth, reflecting upon it that I did kiss a queen.”

‘And I was deliciously shocked by a scene in the 1976 western The Missouri Breaks. Mourners gather around the coffin of a man in a hushed room in their finery. The absolute terror on their faces as Brando’s character strides in unannounced, grabs the corpse by the lapels and yanks him up to his own face for scrutiny. A wonderfully transgressive, shocking moment for the viewer, who does not know if Brando is going to bite him or kiss him.’

The diary of Samuel Pepys