Yes, I tell her and remember standing, six years old
in the hallway, the swamp spirits rising up through the floor.
Walking to school through them
sitting beside them on the bus.

We, white men who have carved ourselves into statues and guard the four avenues, rise
we, Queen Victoria - made of stone - who stares into the air past every kind of massacre, rise
we, far-right, we rise
we, skinheads, we rise
we, the white supreme, we rise

we are white ghosts and we rise up out of the swamp.
You cry and shake as if the earthquake is coming
but we are not here for you.

You can lock down your schools and your buildings
and your pain can come and go
but we don’t care, we have not come here for you.

We are only killing the people you have been calling the terrorists
and today, we look like Fortnight.

I watch Jacinda at Al Noor after many bad things happen
she is in a black and gold hijab
she says many things but she has her hand over her heart
she keeps it there.

The spirits have sunk back out of sight
you are watching that ‘indvidual’ from Australia
you are saying to me: He isn’t us.

But I grew up with him
he was Eddie the skinhead in my Science class
who everybody knew
he had a Māori girlfriend for a while
and wore a Nazi trench-coat which you told me was cool.

Remember, you grew up with him
he was Danny, not in your class
because he was younger than you
but you watched him walk through the playground
with his boot-boy boots and the swastikas.

In Auckland I sit at the vigil
the women of Ngāti Whātua call to the sacred land across Tāmaki Makaurau
the women call to the martyrs, to the broken hearted

the women do the grieving for us
the women remind us of Parihaka and Ruatoki
the murdered and their murderers.

The women say
that they have been fighting since Captain Cook landed
and after they grieve, they will fight.

A white man who could be scary in another place
hands me a sign and I take it
it says: NZ was founded on White Supremacist Violence
he looks into my eyes, I nod and hoist it to my shoulder.

LISTEN to ‘Massacre’ by Tusiata Avia 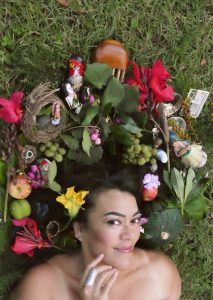 Tusiata Avia is a poet, performer and writer. She has published three books of poetry, a chapbook and three children’s books and is included in over 100 anthologies and journals. Tusiata has held a number of writers’ residencies and awards, including the CNZ Fulbright Pacific Writer’s Fellowship at University of Hawai’i and the Janet Frame Literary Trust Award.  Known for her dynamic performance style, she wrote and performed Wild Dogs Under My Skirt as a one-woman show from 2002-2009. In 2016 it became a multi award-winning play, directed by Anapela Polata’ivao, for six women. In January 2020 Wild Dogs Under My Skirt made its American debut, Off-Broadway.