I take back your sharktooth crucifix,
the slate steps to famine
in the blue-eyed house. I take
back the hours at the tabernacle pub,
the piss talk, the palette of sand
on the counter. I take back the spit
where we learned to drift like a black boat
anchored to a photograph’s horizon,
your mouth on my skin a spelling mistake, a lower
case language I can’t unlearn, your shoulderbone
a clause of smoke-ring cool as the vice
of a moonlit belt pulled south
& heard as snakeskin, the buckle
like a bullet hole. I take back my fingertips
sequinned with come, my replica prayer, the car
parts’ glint in the lounge like code words.
I take back the wreck, and the resin,
the rags on the fenceline, the easterly
jawbone roped to the shed. I take
back the sound of the river
unbuttoning stones, each dog
bark a black fern. I take back
the cuttings from the stained
glass abortion clinic, table
glazed with your beercap tarot, laugh
after death. 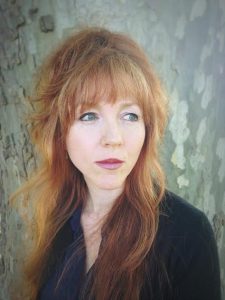 Tracey Slaughter was born in Ōtahuhu in 1972, and grew up in the Waikato and the Coromandel Peninsula. Her latest book of poetry is Conventional Weapons (Victoria University Press, 2019), and she is the author of the acclaimed short story collection deleted scenes for lovers (VUP, 2016). Her poetry, fiction and essays have received numerous awards, including Katherine Mansfield Awards in 2001 and 2004, the 2014 Bridport Prize and the 2015 Landfall Essay Prize. Most recently she won second place in The Moth Short Story award 2018, was shortlisted in the 2018 Mslexia Short Story award, and came second in the 2018 Peter Porter Poetry Prize 2018 with the poem ‘breather’. She teaches Creative Writing at the University of Waikato, where she edits the literary journal Mayhem, and in 2020 she is stepping into the role of Editor of Poetry New Zealand.

Slaughter comments: ‘Sometimes when writing, words click into the chamber & load a voice that knows what it wants. That repeated statement “I take back” was a ready “conventional weapon” like that: I only had to utter it & it somehow locked target on love-shaped shadows that lined unconscious galleries, bloody sites that waited in the backrooms of boyfriends past. Those three words summoned scenes, scars, fragments to the surface, ordered inmates out of their cells, chanted memories into the firing line with the force of incantation. The images kept their unconscious aura, but they sought each other’s heat, knew where to fuse & form. I remember this happening semi-automatic & fast: the voice had teeth & tempo & music & I let it take aim at will (“I take back” could not have been diluted to lament or petition such as “give me back”), then stared down into the page to see what I’d struck. Mostly of course, as poets do, I’d only exposed myself…but it’s possible at least one old boyfriend was wounded in the making of “love AD”.’