Inside the Sunday morning comic strips, we trained hard
to catch as much laughter as we could bear, and stay
away from the ordinary kinds of trouble that are so
exhilarating.  We could imagine the world a fine place
for walking out across the fields, and not to throw
stones at birds.

And here’s Big Daddy Warbucks, cash on the line,
flashing a wad of bills, being smoked by his fat cigar.
Who has finally made it, shoulder arms, and will one day
take giant steps and march to the counting house,
right out of the picture.

Looking on, her saucer eyes, hair electric with
something she can’t find a name for, Little Orphan Annie,
wringing her hands full of loneliness.  Looking for a place
to come home to with windows full of light.

And that large Dog in the corner of the picture, eating air
he is howling you can hear him, his eyes on fire, he is howling
for a life gone missing. 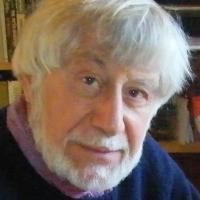 Michael Harlow has written 12 books of poetry, and was awarded the prestigous Prime Minister’s Award for Literary Achievement for Poetry in 2018.  A collection of his poems, Nothing For It But To Sing, won the Kathleen Grattan Award for Poetry, and in 2014 he was awarded the Lauris Edmond Memorial prize for Distinguished Contribution to New Zealand poetry.  He has been awarded a number of Writers’ Residences including the Robert Burns Fellowship, the Katherine Mansfield Menton Fellowship to France.  In 2019 The Moon in a Bowl of Water was published by Otago University Press.  He lives and works in Central Otago as a writer, editor, and Jungian therapist.

Harlow comments: ‘I’ve often been asked, Why did you want to be a poet anyway? And How did it that happen? Searching questions; and not unlike so much poetry itself, trying to discover how it is we are so mysterious to ourselves and to the world out there.

‘I began to make heart wrenchingly serious poems when I fell in love with the “girl next door”.  It was the only way I thought I might impress her, or at least get her to notice my glancing smiles and fumbling casual conversation. This is when music enters the poetry picture.  The music of poetry.  She played the piano and the flute, and very accomplished too; and she confessed at one of our orchestral music rehearsals that she liked poetry. Lots.

‘And I’m still ask myself when wrestling with the language that might make a poem happen, how do these poems arrive?  And again when reading poems that strike a light in the ear, since the eye and the ear have such an intimate relationship.  There were only six books in the household where I grew up; and these were safely stowed away in my parents’ bedroom.  No surprise then that I was an early and avid reader.  Pretty insatiable really, ever in search of something to read to open up worlds beyond the narrow place in which I was so confused.  I would read anything.  Especially adventure stores and comic books which were cheap enough for pocket money, and easily traded around.

‘And the highlight the “Sunday morning with pictures” on radio—the very title of this poem.  This world of comic book stories that was exciting, sometimes pretty scary even menacing; and so full of funnies, sometimes hilarious and fall-about laughter.  All of which is I think an ordinary blessing to be had for what turned out to be the making of a poet—with a kind of desperate imagination.

‘As this poem says in the first panel: “we trained hard / to catch as much laughter as we could bear/ … We could imagine the world a fine place / for walking out across the fields and never to throw / stones at birds.”

‘And because this is a prose-poem with a narrative line and a lyric impulse; and because the light lies down with the dark, there’s this comic book character Big Daddy Warbucks “…flashing a wad of bills, being smoked by his fat cigar”, who makes a satiric appearance.

‘And from the same comic strip here’s the intriguing Little Orphan Annie: “saucer eyes, hair electric…wringing her hands full of loneliness, looking for a place to come home to…”  And finally, to conclude the poem and always to keep it open: the “large Dog…his eyes on fire, he is howling for a life gone missing.”

‘For reasons, then and now, I can only guess at, this “howling” dog is still in the picture from time to time in my mytho-poetic imaginative world.’