that I once saw blowing up Cuba Street

I put a video of it on the internet

I keep a bucket by my bed

then he thanked me kindly and went to sleep

it’s one of my bad habits

I remember a nurse once tried to convert me

to Christianity in a hospital bathroom

then I stopped and said     wait

but the hate that I spread is bespoke—

with the brand statement : a little self-loathing goes a long way : like

I put my body in a bath once

I sat in the bath and ate a bag of Twisties

the Twisties were orange     which is normal for Twisties

the bathwater was also orange     which is not normal for bathwater

and they talk about bodies of water

and they talk about the body of a car

my body is a car with a drowned thing inside

my body is unswallowed and dangling above the water

but my body always tells it wrong

which is a terrible betrayal :

to sell god to me in the bathroom

but my body was too tired to convince anyone 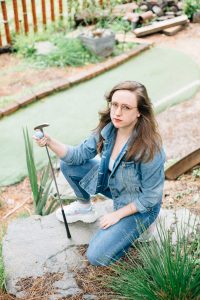 Freya Daly Sadgrove is a writer and performer from Pōneke. Her first poetry collection, Head Girl, was published in February with Victoria University Press. She is the architect behind Show Ponies, hailed by Janis Freegard as ‘a new bar for poetry’.

Daly Sadgrove comments: ‘The only thing I want to say about this poem is that – in case you aren’t familiar with the concept – a Turducken is a dish consisting of a chicken stuffed inside a duck stuffed inside a turkey. I have never tasted Turducken, but if it were offered to me I wouldn’t say no.’