On flying ant day, Elliot took me to the glowing sign
outside Kenneth Williams’ apartment. We stared at it
for the necessary long while. Kenneth Williams
said he hated everyone and everything, especially, but especially
Peter Pan. He died on April 15, 1988. The day before that
he wrote in his diary ‘Oh –
what’s the bloody point?’

In my town people would sometimes lie down
on the railway tracks, because that
was a good joke

One of Elliot’s friends had a terrible argument with his fiancée
before the wedding, and later said to Elliot: ‘It’s a necessary part
of the ritual, a bit like them Peruvian drug ordeals, where you go

into the forest and get attacked by a ghost bear
with a skull for a head that represents your inner child: horrible
but how can you be sure your bond will be strong

enough unless you’ve tested it against a ghost
bear with a skull head?’

Elliot paused to extract a flying ant from my ear
as a panhandler visited us, holding his hat over his thighs
as if about to sing, when the ants were visited upon him

a boy in my class climbed up on an overhead bridge
and was electrocuted
but he lived, and a few months later
scored a try on the rugby field
and a boy standing beside me said ‘He’s just showing off
because he got electrocuted’

a family man once asked me ‘Do you think of me as your teacher
or as a friend’ and with the skull head of a bear
leaned in to kiss me, as per the necessary
part of the ritual

When there are two frail old women together, there is always one
who is visibly stronger.
I have an old friend and I think about whether we will be old together
and which of us will be stronger, holding up the other
which of us the wind will push over first
for a good joke

Two years after flying ant day Elliot stood on the basement steps
of his great grandmother’s house in Bramley Fall Woods
and there was no house left, only the steps, hidden under cold leaves
going up and up into the forest 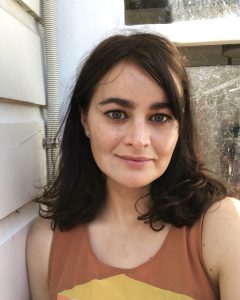 Ashleigh Young is the author of two poetry collections (Magnificent Moon, 2012 and How I Get Ready, 2019) and an essay collection, Can You Tolerate This? (2016). She writes a column for Canvas Magazine and is poetry editor for The Spinoff. She works as an editor with Victoria University Press.

Young comments: ‘This poem moves between Te Kūiti, where I grew up, and London, where lots of my family and friends are. It’s a series of snapshots of people and places and events, and all of them are true. I was thinking about how tightly we try to hold on to certain things, especially stories, even as they get further and further away from us. Actually – there is one bit that isn’t true. It turns out that “flying ant day” is not actually a thing. As in, there isn’t a specific day when the flying ants come to town. It just feels like there is.’