High up there's no house in sight
yet clear, cold barking comes from
miles away. Bark then, you unseen
stroppy bugger. Ring it back from
bells of frosted sky and hillside.
I hear you, here at Welshmen's Gully

now dressed as Cambrian, with gorse
broom flats, an un-named grave above
the cutting, and the tussock on high
ridges. Bark, you bugger, in this chill
morning, and maybe someone kind
will come to free us from the chain. 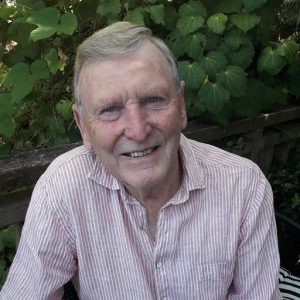 Owen Marshall, novelist, short story writer, poet and anthologist,
has published over thirty books.  Awards include the Deutz Medal for
Fiction, the New Zealand Literary Fund Scholarship in Letters,
fellowships at Otago and Canterbury universities and the Katherine
Mansfield Memorial Fellowship in France.  He is an Officer of the New
Zealand Order of Merit for services to literature, a Companion of the
New Zealand Order of Merit, and has received the Prime Minister’s Award
for Literary Achievement.  He is an adjunct professor at the University
of Canterbury, which awarded him an honorary Litt D in 2002.

Marshall comments: ‘There are certain sounds that incline me to reflection,
introspection, even melancholy perhaps: distant train whistles in the
night, the haunting cry of a morepork, the sombre percussion of waves on
a desolate shore.  Also the far off and echoing bark of a dog that seems
both challenge and lament.  This dog I heard early one morning while
staying in the isolated Cambrian Valley of Central Otago.’