The net drew taut between two
flimsy trees on a yard down Te Ahuahu.
We didn’t know why we climbed it,
our small girl-bodies snaking

towards the middle. It fit three of us
before snapping; me, unconscious
for the first time, blood in the mouth.
I hid that blackness, the moment of lost

time was mine; only Rana and Jackie knew,
Eloise too, Come on, they said. Our secret
was our altered states. Our fear, clinical, like
hiding our new women’s bodies. We were ace

at secrets. I’m trying to have, to give you
a good clean New Zealand memory,
do you see it? The idyllic blue, the red
pōhutukawa stamens spilling on the street,

a red dust we all know. Keep saying
‘the summer of 2015’ but the summer
here spans multiple years, she said,
spills over. Come on, I knew that rhythm once.

How unfixed time is to me now
how chaotic its context.
Words don’t lie, though, about not lying.
Keep safe your child’s sense of chronology

to avoid problems later in life.
Do you see it? W. breaks
the black night, Come on, he says, so angry
at the constant scene; his family now

a map of blank spaces.
I’m trying to give you something—
the fat bees in the lavender hedge, the soft
gorse flowers hidden in the thorns, birdsong.

But there is also the acrid exhaust
clouding Bobby’s car one gentle night,
a fog rising; and Matt’s ravaged face, so ruined
his faded eyes and hands, but beautifully still.

You have to show up
for the people you knew as children
when you’ve been gone a long time.
You do not take photos.

The world doesn’t arrive virtually.
A gripped shoulder. Light through
leftover magnolias. Silences held and
withheld between two people. And the rain,

how it fastens and unfastens the day.
But knowledge of me and them exists, still,
and like then, somehow, we’re still a long way
away from it all.

Come on, we’ll take a ride out to the bay,
you say, it’ll all go by so fast,
we’ll look at the small, cold islands out there,
some just for rich people, some just for birds. 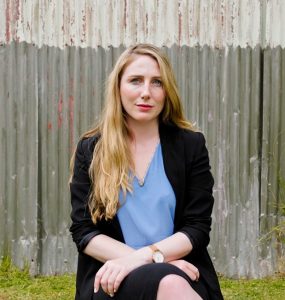 Nikki-Lee Birdsey was born in Piha, New Zealand. She holds an MFA from the Iowa Writers’ Workshop and a BA from New York University. Her poems have been published in various journals including The Iowa Review, Fence, LIT, Sport, The Volta, Hinchas de Poesia and Hazlitt. In 2015 she was a visiting faculty fellow at the International Institute of Modern Letters at Victoria University of Wellington, where she is currently a PhD candidate in Poetry. Her first book Night As Day was published by Victoria University Press in April 2019.

Birdsey comments: ‘Mutuwhenua is the last day of the Maramataka, the Māori lunar calendar. By then the moon is almost invisible. Some consider it an unlucky day and night. I first read Patricia Grace’s 1978 novel Mutuwhenua: The Moon Sleeps when I was the girl of this poem, before I immigrated to the United States. The novel Mutuwhenua: The Moon Sleeps meant a great deal to me, and still does.

‘This poem recalls a memory while questioning memory itself. It asks repeatedly, “Do you see it?” It asks what do you see when you see this place? Both asking and questioning. Memories are blurred, one bleeding into the next: “blood in the mouth”, “a red dust we all know” recalling menstruation, too, and girlhood, as the poem spills over, in, and around its images and actions.’