see me see me
by the sycamore tree
each child a propeller
sorry each child has a
propeller & is throwing
it up  & the dead seeds
spin & spin & spin & they
shriek my little ones & pick up another
one & another one  & spin & spin
& spin  sorry I was right
at the beginning each child
is a propeller & I
stand at th still point on
th warm path  & th world
spins round me shouting
& whoopin & spittin
its ends tied up in its
beginnings  & bits & pieces
lost in th spinning &
I know you’re watching
from your house by th path
with a desk by th window
today we’ve stopped
right n front f you
but I can’t move th childrn on
not while they’re spnning
like littl propellers  like
lttl worlds
fallin ove & gulpin &
laughin & spinnin again  &
I kno you’re watching & the kids
kno too  there’s
the witch they say turns us in-
to stories  and
I see you where th light
settles inside th glass
& I have no idea
what it is you write but I
wish I could see
those whol words  those
complete sentnces laid out
neatly on a page like
seedlngs in soil  with all
their beginnings & end-
ings  & tendril possibilities
curling into th air
into th cavities of walls
th attic  th roof
I can  shh  hear th hush
around you  snf  smell th
coolness of yr room and how
I long for th feel of that pen in my hand
I pick up & I pick up
a handful of seeds throw
them highr than th childrn
cn go faster than th childrn cn
go  & th children whirling
fall ove themslves &
ove me  & they shriek & they
shrk  do it agn do it agn!  &
I’m maddened with
th spinnin  & th shriekin
& th sun & th warm path
& th seeds n my hands  &
th vegetable love
I hav for thm  & I want nothing
els nothing else wll do
but something
happens wth th sun coming
throu th leaves  & fallng
on th glass & I see
your face in th window lit
from brow t chin  stretchd
in its own wild shriek
not bent ove your writin
desk bt lookin at th
children there  lookin
at th turning children
there  &
I throw the  sycamore seeds
one mor time as high
as hi  as hi  as   they    can
go    &  I wish 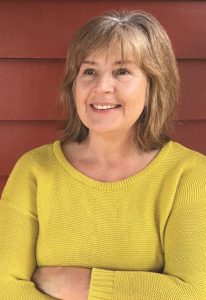 Mary McCallum is a poet, novelist, editor and publisher, who lives in Wellington and the Wairarapa. She was born in Zambia in 1961 and emigrated to New Zealand at the age of four. She studied at Victoria University of Wellington, including a Masters in creative writing, worked as a broadcasting journalist, bookseller, book reviewer and creative writing tutor and has been publishing poetry in journals since the 1970s, when she won the PEN Young Writer of the Year Award and was commended in the Denis Glover Award. More recently she has received the Louis Johnson Bursary, Lilian Ida Smith Award and Caselberg Trust International Poetry Prize, and has won two Montana New Zealand Book Awards for her debut novel The Blue.  Mary has also published a children’s novel, Dappled Annie and the Tigrish (Gecko Press) and, under her own imprint, a chapbook The Tenderness of Light and a full collection XYZ of Happiness. She is the director of two Wellington presses: The Cuba Press and Mākaro Press.

McCallum comments: ‘The sycamore tree was in the lane where I lived about twenty years ago when my children were small and I wrote the poem. On our way home in autumn, we’d throw the seed pods in the air and watch them spin, and we’d spin trying to catch them. There was a house with a study that looked onto the lane right by the sycamore tree. I’d see a woman in there writing at a desk by the window and my heart would skip a beat. I was a writer too. I’d been writing poems and stories ever since I learned to write at the age of four. As a teenager, I’d entered competitions and sent poems off to publications. I won a PEN award, got into a couple of anthologies and was runner-up in a prize named after a famous poet. Then my whole world spun and settled back differently on its axis when I was accepted by a young university lecturer and poet called Bill Manhire for his Original Composition class at Victoria University.

‘After I graduated I got busy working as a journalist, travelling overseas and then starting a family. My poems piled up untidily in biro-scrawled notebooks, typewritten manuscripts, and eventually computer folders. I felt I didn’t have the time to polish them or send them off. While the woman in the window had words at her fingertips, mine were spinning away from me, lost in breathlessness as I spun with my children, lost inside a crowded mind, lost inside the filing system in my house. And this was both wonderful and terrible. For I would never have given up what my children gave me – the daily reminder that love matters most, that living in the moment and engaging with the physical world and not measuring everything by the clock are critical to our wellbeing as humans, that chaos is only a turn away, and words can be on the edge of that chaos, just out of reach and breaking apart. But it is a terrible terrible thing for a writer not to be a part of finding those words, and remaking and rearranging them to tell a new story. You feel it is what you were born to do.

‘Twenty years on, my children have grown up and left home and I guess I’m the woman at the writing desk now, or almost. I am certainly writing more, and more of my work is being published – including “Sycamore Tree” – but still not enough, never enough. For, and I realise this only now, aren’t I always going to be that person caught up in all the spinning?’