Grimacing, sunburnt blokes sawing the shit out of wood
for prizes—now that’s sport. The mania of two people
contra-pulling one thing, trying to make a breakthrough,
a very literal break through the bottom of a pine log,
is like a conversation between matter and energy.
This front-and-back, powerful, achingly unctuous motion could be
the first step in making paper or a clock face,
but no—it’s fine destruction. And as I watch I think
that, first, being the men, or, second, being the saw
would be the dream, either the agents or the tool
of the show’s obliteration, but for poise and certainty,
pinioned in the sawbuck like a cylindrical, primitive statue
of a cast-off god, you can’t beat the log. 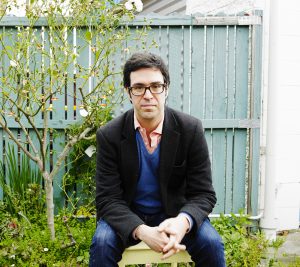 Erik Kennedy is the author of the chapbook Twenty-Six Factitions (Cold Hub Press, 2017) and the full-length collection There’s No Place Like the Internet in Springtime (Victoria University Press, 2018). From 2015 to 2018 he was the poetry editor for the online litmag Queen Mob’s Teahouse. Originally from New Jersey, he lives in Christchurch, New Zealand.

Kennedy comments: ‘This poem has always been a personal favourite of mine because, unusually, its subject imposed itself on me rather than me imposing myself on the subject. The sporting event depicted in the poem took place at only my second A&P Show, in 2015, and I was caught off-guard. I didn’t particularly expect to like wood sports, which I think I had imagined as coarse and simple, not exalted and elegant. If I could be so wrong about that, what else might I be wrong about? For the curious, the winners of the 2015 double saw final were Craig Unahi and Steve Unahi of Southland.’