year of the monkey
see no evil, hear no evil,
speak no evil

each new cycle
always starts with dragons
ending with a dog

master artisan
pine trees and mountaintops
painted with his  palm 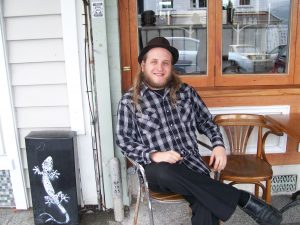 Doc Drumheller was born in Charleston, South Carolina and has lived in New Zealand for more than half his life. He has worked in award winning groups for theatre and music and has published ten collections of poetry. His poems have been translated into more than twenty languages, and he has performed in Cuba, Lithuania, Italy, Hungary, Bulgaria, Romania, Japan, India, China, Nicaragua, Mexico, El Salvador, USA, and widely throughout NZ. He lives in Oxford, where he edits and publishes the literary journal Catalyst.

Drumheller comments: ‘This sequence of haiku was composed during an eighteen hour layover in Guangzhou City, when I was returning home from to New Zealand after a poetry tour in Europe that included visits to Sofia, Paris, and Berlin. I flew with Southern China Airlines, and they gave me accommodation at a hotel, with breakfast, a tour of Guangzhou City, on a tour bus, with a guide, who spoke English, free lunch at a Cantonese restaurant, return transport to the hotel for a rest, and a shuttle back to the airport. It was quite an extraordinary day, and I was inspired to write more than 40 haiku in this short time span.

‘“Guangzhou City Haiku” was first published in Catalyst Volume 15, Sister Cities, for which I am the publisher and editor in chief.  I was honoured to represent Waimakariri, and New Zealand as a cultural ambassador to Enshi, China, in October 2018, and dedicated this volume of Catalyst to celebrate our connection with China, and our Sister Cities.

‘The Chinese feature in Catalyst Volume 15, incorporates photography from Enshi, and these beautiful images complement the showcase of China’s leading contemporary poets, edited and translated by Bei Ta, the Chinese Director of the World Congress of Poets. The feature includes six photographers from Enshi, and five poets from China, presented in both English and Chinese.

‘As part of this trip I was also invited to represent New Zealand at several international poetry Festivals, The 38 World Congress of Poets, the 2nd China Suiyang Twelve Back International Poetry Tourism Week, and the Shengze Silk and Poetry Festival in Jiangsu Province, where I was honoured to be appointed as the New Zealand Director of the Silk Road Poetry Project.’