Gold rings around my ankles in the Hanmer
Pool, a hot drop on my wrist and my skin
falls open like the gills of a fish. One hundred
elderly women standing along the Clutha
with lighted candles in their hands.
It’s humbling. It’s a necessary prayer for peace.
And here comes the rain. It fills the leafy
bowls and cups and spoons that the trees hold up
until they tilt and spill their bright outpourings
onto the dry earth. The ginger tom
is mooching. He’s spraying everything within
reach in the beautiful garden. It’s his way
of keeping  us all safe. How good it is to rise
like this, my love, slowly, into the light of your face. 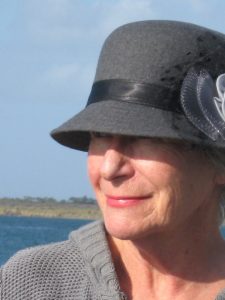 Bernadette Hall lives in a renovated bach at Amberley Beach in North Canterbury.  She has published ten collections of poetry, the most recent being Life & Customs (Victoria University Press 2013) and Maukatere, floating mountain (Seraph Press 2016), which includes artwork by the Wellington artist / writer Rachel O’Neill.

In 2015 Bernadette received the Prime Minister’s Award for Poetry. In 2017, she was invested as a Member of the New Zealand Order of Merit for her services to literature. She is Patron of the Hagley Writers’ Institute in Christchurch and mentors students there.  In 2018, poems of hers appeared in Poetry (The Poetry Foundation, Chicago), Bonsai (Canterbury University Press), Landfall 235, Aotearotica 5, Catalyst 15 and Broadsheet 22.   Five of her poems were included in the VUP anthology Short Poems of New Zealand, edited by Jenny Bornholdt.  With thanks to those editors.

Hall comments: ‘“O my Luve’s like a red red rose / That’s newly sprung in June; / O my Luve’s like the melodie / That’s sweetly play’d in tune”  etc.  by Robert Burns. What more can anyone say? I’ve tried to say a little something and am very happy that it appears now within these pages.’