We had come a long way, and the day was largely through before
we had even set out, the children already home from school, the washing
dry, our feet sore and still we walked on and on as the sun
began to fall lower in the sky, the heat, too, settling lower in the air,
the sweat pooling around the wiring of our bras. Our shadows
lengthening behind us, we piled our clothes
onto a rock, stepped over shells
and climbed over rock pools to where the sea
began to come in, passed one dead fish and then another,
stepped over a third as the sand grew less and less
like sand and more and more like mud or just the silt of one dead
fish dissolving straight into the next. Still we stepped on
into the sea, our feet bleeding, the waves washing
the blood ahead of us, and the first few white shapes that
might have been plants and might have been animals
began to appear. Before long we were wading
through such a thicket of these things
the sea hardly seemed to get a look in, yet it appeared
clearer ahead, so we fought our way onwards, swimming now,
still surrounded but looking always ahead to the clear sea beyond and
it did seem the silvery things were thinning, perhaps, but also beginning
to take on a glow as the sun hit them lower and lower from the sky,
a silvery glow almost as if they were being lit by moonlight
and it looked almost like moonlight shining on the clear patch of sea
we were sure we could see just ahead. And now the first glints
of gold were beginning to appear, at first just a few specks of pollen
in amongst the silvery plant-creatures, and then, as we swam
clear of the silver, more and more of them until
we were surrounded by what seemed like an ocean of gold, glowing
so golden in the light the pollen almost looked pink,
as if the first light of dawn had arrived, and as
we swam on, further and further out, I began to wonder
if we would ever find ourselves
back where we had left our clothes behind us on the shore. 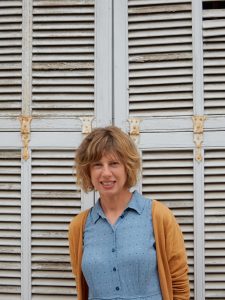 Anna Jackson’s Pasture and Flock: New and Selected Poems (Auckland University Press) includes 25 new poems about tombs, ghosts, radishes, a cooking show, a late swim, bees and other subjects, as well as collecting up poems from earlier collections as far back as her selection for AUP New Poets One published in 1999.  She lives in Island Bay, Wellington, lectures at Victoria University, and is currently editor for a new series of AUP New Poets anthologies.

Jackson comments: ‘“Late Swim” is the true story of a swim which was even more horrible than the poem conveys since I couldn’t work the sting-ray in along with the dead fish, cut feet, and strange silvery plant creatures.  After I got home (we did, in fact, eventually find ourselves back on the shore) I did a bit of a Google search to find out if the infestation we had been swimming through had been an infestation of plants or animals.  I don’t remember what exactly the search terms were, but I was really pleased with the answer Google gave me.’