We know that carvers coax something or someone
Who’s already there in the wood.
They remove small pieces of timber, one by one,
until it’s ready.

We both know a language is waiting inside my tongue.

Please put down the adze, the skillsaw, the file:
Speak gently to me so I can recognise what’s there.

No, don’t chip away at pink flesh and taste buds:
Oozing and swollen, I will choke on my blood
before you’re done.

The wood you’re trying to carve is still a tree. 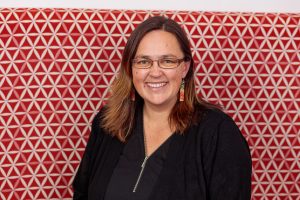 Alice Te Punga Somerville (Te Ātiawa/ Taranaki) is a scholar, poet and irredentist. Born on her tribal homelands in Wellington, raised in Auckland, and having lived overseas for half of her adult life, she is now Associate Professor in the Faculty of Māori and Indigenous Studies at the University of Waikato, where she writes and teaches at the intersections of Indigenous, Pacific, literary and cultural studies. When she was seven at a school full of Māori and Pasifika students, she won a principal’s award for a poem about tulips; she has been trying to decolonise her writing (and decolonise herself through writing) ever since.

Te Punga Somerville comments: ‘Years ago, Hone Tuwhare wrote “On a Theme by Hone Taiapa” which resulted from a conversation comparing writing and wood carving between the foundational Māori poet and the skilled carver. “Rākau” picks up on the link Tuwhare describes between carving wood and carving language, but does so as a way to reflect on the process of trying to learn the Māori language that, had the past two hundred years worked out differently, I would have spoken from birth. The poem makes the best sense when read alongside its gorgeous translation by Te Ataahia Hurihanganui; as well as affirming the warm generosity shown by many people proficient in the Māori language towards those who are more monolingual than they would like, the translation also makes visible the way that in the Māori language the word “rākau” is used to refer both to wood and a tree. (Yes, this poem expresses a painful distinction that one only experiences when confined to the English language.)’

About the translator: Te Ataahia Hurihanganui (Ngāti Tūhourangi, Ngāti Tūwharetoa, Ngāti Tahu, Ngāti Ira, Ngāti Porou, Ngāti Kahungunu, Rangitāne), also known by her nickname Taahia, is a passionate multilingual who loves learning about other languages and cultures as well as her own. She wears many professional hats: Māori Language Teacher, Tutor-trainer, Translator to name a few, but her favourite role in the world is that of being Māmā to three-year old Mario and baby Māreikura. She enjoys the constant challenge of balancing work and home life and is always on the lookout for new, inspiring creative opportunities!

Hurihanganui comments: ‘The process I take when translating poetry is a layered one, much like whakapapa. I see the poem as the uri, or child of what has come before - the words, their meaning, their story, the poet, her storytelling, her art, her background and so on. Seeing it as layers enables me to feel its depth, explore its boundaries and gain a sense of mood and tone which may not be obvious on first glance. Sometimes after reading, I will draw a picture or illustrate symbols that capture my interpretation of the poem. For “Rākau”, I did this first and noticed that my drawings were reflecting me and my other (spoken) languages. So, as Italian is currently the language my family and I speak at home, I found it easier to write an Italian version of the poem before translating that to Māori. I find that Italian and Māori complement each other well, sharing similar structures (e.g. noun before adjective) and being bold and descriptive in nature. Consequently, by translating this way, I have woven my own layer into the poem.

‘For the line: “...coax something or someone. Who’s already there in the wood...”, which I translated to “...ka kukume mai i te mauri o roto rawa i te rākau”, personifying in Māori was simple in the context of this poem because in Māori there are already words like - “mauri” which loosely translates to “life principle, life force, vital essence, special nature, a material symbol of a life principle, source of emotions - the essential quality and vitality of a being or entity. Also used for a physical object, individual, ecosystem or social group in which this essence is located.” So, “mauri” replaces the English equivalents 'someone or something' i.e. it describes an unknown being, but implies it is so much more than just a “someone or something”...’