Driving along Main Street the old places dangle,
unpolished, from a tacky tarmac chain:
the squat, grey-rock women’s hospital,
the chipped and faded boards of our grandparents’
ex-state bungalow. The Baptist Church’s cut-glass angles
now The River of Life Centre and, opposite,
my once-boyfriend’s cubazoid, sunset brick-and-tile
studded with net-curtained windows.

The centrepiece of the collection, the high school, has
sustained some major alterations. The maths prefabs
have gone. The science labs, solid concrete blocks
that surely should have stood monument forever,
have been razed, entirely replaced by a rectangle-cut gem
of emerald grass set with three saplings.

Doubling back, I drive through the front gates
that, according to the sign, should be locked by now.
But tonight the car park is full of vehicles;
there’s something going on in the hall. Parent-teacher
conferences? Careers night? At a crawl I complete
the circuit, passing the marae, the special needs unit;
both seem to have shrunk. At the exit, the mural
on the road-facing wall is unchanged,
its violently erupting volcano still showering
that unnamed wahine in ash and steam, her face
still wearing that vague, unfinished look.

Pulling up to the roundabout there’s a faint figure
looming in the dusk, a teenage girl running
in front of my car. Her mate hesitates, looking
directly at me. I smile and wave at her and, although
she still seems unsure, she goes anyway.
I pass them, still running, pleated tartan skirts
flying. And then there’s those god-awful imitation windmills,
a final faded pair of geegaws, smaller from this angle. 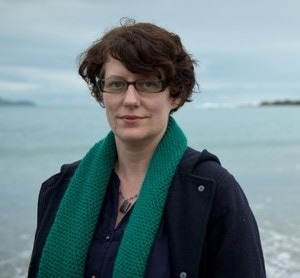 Claire Orchard is a poet from Wellington whose debut poetry collection, Cold Water Cure, was published by Victoria University Press in 2016. She is currently working on her second book.

Claire comments: ‘Every now and then I’ll have an errand to run in the suburb where I grew up. Driving through the stomping grounds of my youth, I experience sensations of nostalgia and visceral familiarity, all mixed up and contrasting with a sense of connection to, but also distance from my younger self, and the people, places and things that were important to her. I’m struck, both by any obvious alterations, renovations, removals or additions to the built and natural environments, and by the underlying, reliable constancy of the landscape; the way things are different and, at the same time, how little has changed.
​
‘For overseas readers unfamiliar with te reo Māori, marae in the context of this poem refers to a meeting place encompassing a wharenui (meeting house) and marae ātea (sacred open space in front of the wharenui); wahine translates as woman.’
​
​Poem source details >