The evening sharpens. A light which takes hold of the
day, puts everything back when it’s finished—a different
order. Crisp air. My lungs. How low the sky is. How low?
The night is coming.

Trees moan. The sound of ghosts, sleepless
women. The hills, a creased jacket on the horizon.

Words circle above the surface, like birds. Not quite
speech. Something forgotten. An entire country lost in
thought.

My feet heavy. Streetlights. Threads of light.
Not even he could follow me here. Or could he? His footsteps.
Do I hear them just now?

Darkness knits over the holes, my hands. The distances
between—a different hue are my murmurs of the past.

How it stretches out before me. Too big to
carry. Memory. My shadow unpins itself from my body and
wanders off into the night.

I have walked alone from the other end. To a house, its
eyes. Its red roof, as if drawn by a child.

The sea reaching against it, reaching again.
A wash of colour. My hairs stand on their ends. A kind of
winter passing through the water. 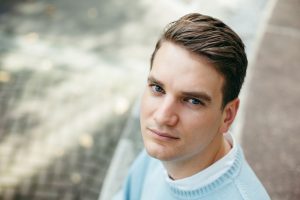 Tim Grgec is a writer and public servant based in Te Whanganui-a-Tara | Wellington. His first poetry collection, All Tito’s Children (Te Herenga Waka University Press, 2021), is a verse biography of the Yugoslavian dictator Josip Broz Tito. He was the 2018 recipient of the Biggs Family Prize for Poetry.

Grgec comments: 'All Tito’s Children is loosely based on the experiences of my paternal grandparents, who as young adults escaped communist Yugoslavia in the 1950s. The book explores my family’s life under the dictatorship of Josip Broz Tito and the conditions which forced many Eastern Europeans to emigrate during the Cold War.

'My grandparents – and infant father – came to New Zealand by ship, with no money, possessions or sense of what was ahead. New Zealand was a country they’d never heard of. It was effectively chosen for them as one of the few places open to taking "displaced persons" from Europe. So began their life in a strange land on the edge of the world.

'In "Lyall Bay, 1959", not only is the speaker overwhelmed by the sights and sounds of this new country, she also has no foundation of language for her feelings to rest upon. The poem concludes All Tito’s Children, yet suggests more of a beginning than an ending. In it I’ve tried to capture the mixed emotions of leaving behind an old world, where even the most hopeful of fresh starts is haunted by the ghosts of the past.'

An interview with Lynn Freeman on RNZ's Standing Room Only

Reviews for All Tito's Children: