News! Where is it if not in newspaper, black type a printer set?
The internet.
If there’s a custard emergency or yoghurt issue,
some armed blasted insurgency in Mogadishu,
or a celebrity opened their beak and deigned to speak to pondslime,
where is it?     Online.
And sport? To what wireless does one sear one’s ears to hear the footfall
of jelly-legged idiots prancing after a football?
Or if some goon lobs a Frisbee, or a cherub swats a golf tee, SLAP?
Where do you find that crap?
That app.
In my day was the news ever fake?
No! Every dawn the front page said SHEEP TRAPPED IN LAKE
or GIRL DRESSED AS MERMAID or THE WEATHER’S A BIT HOT
or TOWN ERECTS STATUE OF GIGANTIC APRICOT.
But now if there’s no news, then what?
Before they flip the channel on
get a panel on.
What if no one’s listening?      The news must be shrieked!
What if journalism’s dead?      The news must be leaked!
They have every minute of the year to fill,
and with what?      Codswallop, hogwash, humbug and swill.
What is news anyway?      Young ladies and lads, comrades,
Look up from your doodads and iPads.
What is it, news?      Whatever sells ads. 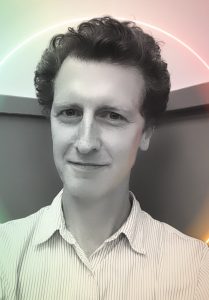 Nick Ascroft has published four collections of poetry through Victoria University Press (now Te Herenga Waka University Press). He has a fifth in the works, which was highly commended in draft form for the Kathleen Grattan prize, making him a four-time runner-up and now far and away the most nearly decorated person in Grattan Prize history. He lives in Wellington and will be free of crushing debt two years after his death.

Ascroft comments: 'This was written for Skinny Dip, an anthology of poetry for kids, with the idea briefed to us of an 11-year-old archetypical reader. There are two ways to approach this. The first is that you can write any cretinous twaddle and what's an 11-year-old going to know? The other is despair, admitting you have no idea what intermediate-age whippersnappers might enjoy in poetry. I'd been briefed by Susan Paris and Kate De Goldi to write about the daily classroom thing where schoolkids discuss the news, called 'current affairs'. I know nothing of this. If I've learnt one thing about what Susan and Kate want from writers writing for children, it's that they're after the child's perspective embodied. I couldn't do it. Instead I had a yell, thinly veiled as a comedy rant. Obviously I'm the great-grandad here. The original title had 'grandad' but the editors thought my word choice reflected a far older person. What the hell?? I was born in the 1970s and have a four-year-old! It still burns that they said that. Ha. But yes, news is a mess, and any sense of serious newsfolk presenting an objective assessment feels old-fashioned. News is online and we filter our own or have it filtered for us. On an international scale at least, money talks, and states peddle narratives with impunity. Maybe in New Zealand we avoid some of that. But the poem remembers the light news of New Zealand front pages with toothy nostalgia. The young probably have never seen a newspaper (or a piece of coal, unrelatedly) so it felt worth sharing. Mostly I just wanted to rhyme 'Mogadishu' with 'yoghurt issue', forcing you to use my 'yoggit' pronunciation and not the usual kiwi 'yo-git'. An important work.'