Tendrils of sweet pea grew over
the relics of a garden

and herons nested in
a swampy corner of the park

the guide told the tour-party
that during a harvest festival

the Sauks were tomahawked
under a yellow moon—

after hearing about the blood-
frenzy that summer night

we stepped onto the muddy rain-
pooled field and took photos

or was that when we went to
the Butterfly House near

wherever it was and my cousin
broke the heel off her shoe?

It’s hard to remember exactly—
there’s only so much you can take in. 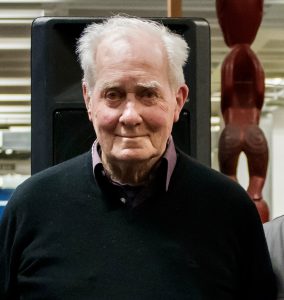 John Weir was born in Nelson in 1935. After training at Mount St Mary’s Seminary, Greenmeadows, Hawke’s Bay, he was ordained a Catholic priest in 1961. Subsequently, at the University of Canterbury, he achieved a PhD in English Language and Literature and taught there for a time. His poems have been published in various New Zealand journals as well as internationally (in England, the United States, India, Canada and Australia). Sparks among the Stubble is his fifth poetry collection. In later years he has become more widely known as an editor and critic in the field of New Zealand Literature.

Weir comments: 'I always wanted my poems to record and consider my experiences and to be accessible to others. Being a priest has, no doubt, introduced notes of rhetoric and generalisation, but I have learned to put a poem through many drafts and try to wring out the rhetoric. My chief task in learning the craft of writing has been to discover my true voice. In this respect, Wordsworth showed me how to write in a plain language, Defoe helped me to focus on the particular. Eliot taught me the importance of phrasing and rhythm.

'"The Tour" communicates the truth of a double experience: that of the tourist who views the site of a tragic event through a camera lens, thereby limiting, framing and restricting the limitless nature of tragedy, and that of the poet-commentator who uses irony to consider the different values set within the limiting frame of the poem. For me, a poem is often most successful when the persona within the narrative and the authorial persona, while at times conflicting, become, for better or worse, one and the same.'