These bits and pieces don’t fit;
so all you can do is make it up.

This patch of blue might be sky,
but, just as easily, deep water.

This bit could be a hill twinked
in cloud; this a broken stump; and this

the torn cover of a book.
Mostly, though, it’s a tombola stall

of what look like body parts:
a tooth, a knee, what could be an eye

or something else entirely.
This might be red hair, this undergrowth.

Quite a few of the pieces
seem consistent with an old crash site.

LISTEN to ‘Bits and pieces #3’ by Harry Ricketts 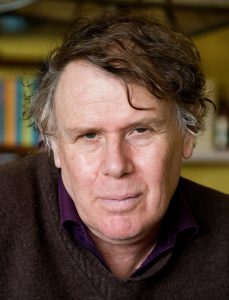 Harry Ricketts was born in London in 1950 and had lived in England, Malaysia and Hong Kong by the time he was nine. He went to boarding school in England and studied English Literature and Language at Trinity College, Oxford (1969-72), where he also gained an MLitt (1975). He has taught English literature and creative writing at Hong Kong University, Leicester University, and Te Herenga Waka Victoria University of Wellington. Ricketts retired in 2021 as a professor after forty years teaching at Te Herenga Waka Victoria University of Wellington. He has published around thirty books, including two acclaimed literary biographies (The Unforgiving Minute: A Life of Rudyard Kipling, Chatto & Windus, 1998, and Strange Meetings: The Poets of the Great War, Chatto & Windus, 2010), a number of anthologies, personal essays and twelve collections of poems, most recently his Selected Poems (Te Herenga Waka Press, 2021).

Ricketts comments: 'Like many people, I started writing poems in my teens, wanting to sound like Ted Hughes and Sylvia Plath, the contemporary poets I most admired. One fantasy in my twenties was to write lyrics for a cult rock band. The fantasy never (thankfully) materialised but writing song lyrics helped me to experiment; so, too, did attending a weekend workshop in 1979 run by the poet Gavin Ewart. Ewart made the class write lots of short poems: haiku, limericks, one-line poems. The idea was to loosen the attenders up and encourage them to play (as Ewart did in his own work). Ewart was adept at different kinds of poetic form and how it might be possible to get new mileage out of what could seem merely traditional. Some of my poems seem to show the long-term impact of Ewart’s example, notably "Grief Limericks", written in 2015 for my dead stepson, and several unrhymed villanelles and triolets.

'I see "Bits and pieces #3" as representing a different, more involuntary strand of my work, in which the poems seem to develop their own shape and momentum. It is a recent poem, added with a few others as a coda to my Selected Poems. The #3 is to indicate that this is "take three" of the poem with the possibility of more takes to come. Here, it is implied, everything, every element, is provisional, maybe just chance. The urge to determine meaning, to distinguish patterns, to make sense – not least of one’s own life – is part of being human. (Hence the pleasure of detective stories, biographies, autobiographies.) At the same time human beings live with the constant fear that in fact nothing makes sense; it is all meaningless. The poem is in seven syllabic couplets (7/9) which (perhaps) hints at the desire to impose a kind of arbitrary order on the bits, events and memories, to make them all of a piece.'