Seems we all missed a memo or two tonight
Because we’re here in the part of the park that has no lights
Once I got mugged in the park at night by five guys
Once I got blown in the park* at night by one guy
Both were within a kilometre of each other
in Auckland in 2009. That’s very far away.
In darkness I’ve clambered from the town belt caked in vomit, mud, cum
Some other things that have happened in parks at night include
counting a guy’s vertebra, losing my mind
I don’t know why this keeps coming up in poems but
The first time I got head was in a park, from Paul C
In Wellington
At dusk, which is half night
Like my hair, which is half old
And smells of ciggies up here in the Frank Kitts tower,
The young half,
I’m fifteen and my whole life is lived in parks at night
I’m seventeen and I watch Rachel A trip on park equipment and fall
And get back on her feet, again
As we run from the cops in Island Bay, again
I’m eighteen and I get a fresh start –
New city, new parks, new nights
I lean out windows over Myers with my ciggie, wave up at Sarah T
Cut through Nixon, Victoria, Basque, Western, Albert,
Sometimes linger a little where the lights don’t reach
And then I move to a city three-quarters the way around the world
Where the parks are barred and locked each night, to me an affront because
The park at night is one of the few places to find perfect pools of light
And one of the few places to step out of the light in search and service of magic.
I’m thirteen in the western suburbs and I find the fabled glow worms
In the park one night, and every night thereafter
I’m older and blazed on the western shores of Lake Taupō and one night
On a trail
I come upon glow worms and learn what
makes the lights go out
I no longer smoke but
Inky black’s still how I like the park, at night
Because I read the memo of my forefathers
Who wrote it in the park,
Together, each night,
Hot or cold or somewhere in between –
worms that stepped out of the light and into the silence
And started to glow. 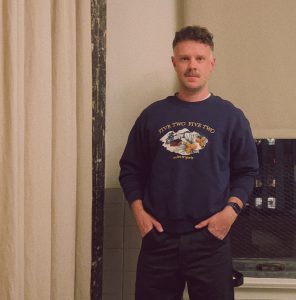 Gus Goldsack is a poet, cat dad and black-sand-beach enthusiast. He grew up in Te Whanganui-a-Tara | Wellington and Tāmaki Makaurau | Auckland, and now lives in Brooklyn, New York. His work has appeared in The Spinoff and Out Here: An anthology of Takatāpui and LGBTQIA+ writers from Aotearoa.

Goldsack comments: 'In considering how to describe this piece, it dawned on me that it's perhaps the least metaphorical set of words I've ever strung together. This really is my ode to the night, and to the most consequential "third place" of my life: the park. Every word in this poem draws from a real experience or relationship – some frivolous, others very meaningful, all reflective of a light I found by stepping into the dark.

'My friend off-handedly referred to this as my poem about "gay sex in parks," which is really what's lying beneath this all. My identity was never relegated to a park at night – I was lucky enough to grow up surrounded by gay men of my parents' generation, and coming out was comparatively easy. In writing this poem, I was reflecting as much on my own life as I was on the lives of the gay men who came before me, who had a much more urgent need for the potential that lived in parks at night. Around the time I was becoming conscious of my sexuality, the gay liberation tide was turning toward assimilation – by the time I was 18, the preeminent queer issue in Aotearoa New Zealand was civil unions, and same-sex marriage followed less than a decade later. But the root of all of this was centuries spent underground, followed by decades of radicalism. So this is my homage to all the queer people who have simply always done exactly what they had to do to find their light, their dignity, or a good time.'

Out Here: An anthology of Takatāpui and LGBTQIA+ writers from Aotearoa (Auckland University Press)