Braced on the landing stage in a gale
she will be waiting with her baby.
The ferry will be late, because of the weather.

It will thrash about offshore for a bit,
hurl a few packages at the beach,
and chug away without taking on passengers.

who cried and threw her handbag in the sea.
Their mother will calm them down and tell them
never to speak about it again:

But someone will speak about it. Gossip
will say what it hears. Gossip will joke:
‘Just as well she didn’t throw Fleur in the sea’.

Phyllis will write a story about it
eighty years later, and send it to Fleur,
in the nick of time; the very nick.

Fleur will explain about the dying father
on the other side of the Manukau Harbour
waiting to meet his first grandchild.

Let’s have less talk of hysteria
by city people. There’s plenty home-grown.
(And anyway, they were from Drury.)

Do you remember, asks the teacher’s wife,
that woman who drowned herself at Grahams Beach?

No, Mother, I was only just born,
if that. You’ll have to tell me about it.

She walked into the sea, stood on a rock,
and hit herself on the head with a hammer

to knock herself out.
Well, that would do it –
(why are we laughing?) How do they know?

Did they find the hammer in her apron pocket
when she was washed up? Or was that someone else?

And don’t call me the teacher’s wife.

Almost irresistible, you’d think,
New Zealand being surrounded by these

emerald/sapphire/leaden waters
waiting to be entered, one way or another.

For example, there was that widowed
second cousin – I don’t think we met her –

who slipped out of a care home in her nightie
and toddled across a road into the sea.

We call it the Shirley Brooks solution,
and cling to it for our own futures

(assuming one or other of us is fated
to be bunged into a bungalow facing a beach).

Naturally I think of Iris, walking
straight down Queen Street and into the harbour

(as soon as two boys had left the wharf),
her ‘quite five cold struggling minutes’ before

she ‘went deeply down once and again,
and breathed in water as if it were life, not death’.

She felt her body roll slowly over,
with its face turned away from the sky:

‘peace: no green fields but just a green colour
and the sound of the waters, until they were dumb . . .’

But suddenly came a rushing moment,
some sort of vehicle, the police matron . . .

All drowners fight at the end, they say.
No, at those moments close to the end.

At the end another urge takes over:
our brains have a sympathetic lobe

that yearns towards water, intoxicated
with the longing to be absorbed in it,

as if we’d spent our lives in denial
of the substance we’re constructed from.

Have you noticed they’re all women?
I could cite some men if necessary,

but we are the sea for men to drown in,
the ravening tide. No wonder we scare them.

Nothing could be easier, in Auckland
or indeed Wellington, than to cross a road
from the city centre and walk on to the wharf.

Green, green swilling under your feet;
seen through the cracks a deep green darkness
inviting you to step up and step down.

They’d fish you out, of course; the CCTV
(which was not a thing in the 1930s
for Iris) would have its fish-eye on you.

No such aqueous yearnings for the teacher’s wife;
next time she finds herself aboard an ocean
it will be her care to keep an eye on Fleur

who is after all still a child, even
if she fancies herself as Juliet
and gazes too meltingly over the rail

(don’t worry, Mother: it’s mostly fiction),
while in her sensible daytime mode
she’s letting her father teach her to swim

between the strained and bulging canvas sides
of the pool erected on an upper deck
like an upside-down marquee full of water:

a capsule of Atlantic or Pacific
for the sea-deprived from post-war Britain
migrating to where seas are everywhere. 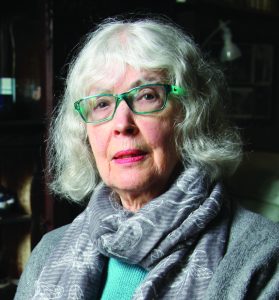 Fleur Adcock is a New Zealand poet, editor and translator who was born in Auckland in 1934 and now resides in Britain. She has published many collections of poems, most recently The Mermaid's Purse (2021) and Collected Poems (2019). Her awards include the 1961 Festival of Wellington Poetry Award, the Jessie Mackay Prize in 1968 and 1972, the Buckland Award in 1968 and 1979, the New Zealand National Book Award in 1984, an OBE in 1986, the Queen’s Gold Medal for Poetry in 2006, a CNZM for services to literature in 2008, and the Prime Minister’s Award for Poetry in 2019.

Adcock comments: 'In May 2013 I was signing books after a reading in Auckland when a woman asked me to sign one for a ninety-year-old relative, Phyllis, who had been my father's star pupil when he was teaching in a tiny, one-teacher school at Grahams Beach on the Manukau Harbour, a place then scarcely accessible except by boat. During his second year there, 1934, I was born and my mother's father entered his final illness. She took me across the harbour to visit him before his death, but her first attempt to do so was thwarted in a dramatic way. I learned this from a little story Phyllis sent me about an episode in her childhood that had puzzled her; fortunately there was just time for me to explain it to her before she died. I began this poem in February 2017, struck by the contrast between Phyllis's account of the incident at Grahams Beach and my mother's reminiscences of her time there. It grew into a wider meditation on ways in which New Zealand women, including Iris Wilkinson (the poet and novelist Robin Hyde), have been drawn to the sea or to drowning. It became an excuse for playing games with tenses, registers and viewpoints. I refer to myself in the third person - as a baby, as a teenager onboard ship - and to my mother (who in her confused old age sometimes thought me a contemporary) under a stylised label. I hope she'd have forgiven me.'