We make out awkwardly on the bed.
And her shifting weight is a tide or the back of the bus.

Have you seen her lately?
Not since she moved out.

to her crotch. It bumps against me in the darkness
like a bottle-nosed dolphin or a chair lift.

Outside the party she kisses me again, her
costume insistent. She has been dead for

two-and-a-half years. She lay down to sleep
at thirty-six and her heart failed. Like it

failed a test or failed a warrant or failed to
come in to work that day like everyone else.

of chemicals and the last stand of the hospice.
She moved out on my birthday and I ripped

up the note she wrote. I ripped up the note
she left me that she wrote me, when she left.

LISTEN to ‘Ohio’ by Emma Barnes 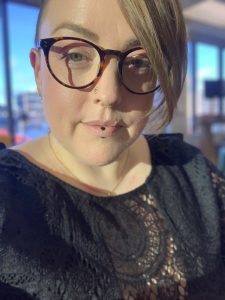 Emma Barnes (Pākehā, they/them) lives in Aro Valley in Pōneke | Wellington. Their poetry has been published in journals including Landfall, Turbine | Kapohau, Cordite and Best New Zealand Poems (2008 and 2010). They are the author of the poetry collection I Am in Bed with You (Auckland University Press, 2021) and a co-editor of Out Here: An anthology of Takatāpui and LGBTQIA+ writers from Aotearoa (AUP, 2021) alongside Chris Tse. When not focusing on poetry Emma spends time powerlifting and continuing an ongoing series of Instagram stories entitled: Moon.

A note about the poem for overseas readers: A warrant is short for a Warrant of Fitness, which is a regular examination a motor vehicle has to pass to be roadworthy.