are not what they seem
or at least are not all alike,
as my precocious eight-year-old son
has recently discovered:
that one infinity
of sand granules or moments,
counterintuitive as it might seem,
really can be larger than another,
as though never ending
can be exceeded by another
never ending.
This is what we discuss
as we sit in Auckland traffic,
he in the back seat,
me gripping the wheel,
inching forward through yet
another set of traffic lights
and roundabouts,
behind the cars that line
as far as vision permits.
My point about infinity
grows more distant
even as I continue to talk and talk,
while in my head I contemplate
the shrinking number of days
he will sit in the back seat
chatting away to my reflection,
with time enough between each question
he asks and my answer to wonder
whether Gauss was right
to say infinity is not real,
just a way of speaking,
as I tried to explain to a teacher
who had taken off points,
when I was just a bit older
than my son is now,
for my response to the statement
'the grains of sand on the earth are infinite'
because it seemed to me evident that
were it possible to count them at the moment
my pencil circled the word 'false'
we would have a precise number
of grains, however small each might be
and however large their number.
I was not able to articulate
to the teacher that such a large
number only feels infinite,
like the many conversations
with my son that seem to conclude
with an infinite set of the word 'no',
or the minutes until we reach his school
this morning, or the time we have left
together, within his childhood,
though I am unable to articulate
in terms even he, smart as he is,
will understand, that at some point
you find one is not granted
an infinity of minutes, that plenitude
must be found within each of them,
something I have never been able
to grasp—viscerally, I mean—
my eyes on the destination
just beyond the last visible point
that recedes seemingly without end,
so am hardly the teacher he needs,
though at any rate some things one
simply must discover for one's self.
So the conversation, though not our car,
rolls on, about number sets
and poor Georg Cantor,
who went insane contemplating
all he could not understand
about what will never end,
and what, despite appearances,
most certainly will, something
a better father wouldn’t have
mentioned, a father more capable
of exercising discretion, who does not feel
the need to fill every silence with sound
as the scenery passes, the North Shore bays,
with their beaches of not-quite endless
grains of sand, albeit slowly enough
to enjoy if one had the inclination,
however momentary, like his attention,
which will shift to something else
entirely when despite all appearances
this concludes, as it does right now,
we’ve arrived, he’s stepping away,
but look at how I go on.

LISTEN to ‘Infinities’ by Bryan Walpert 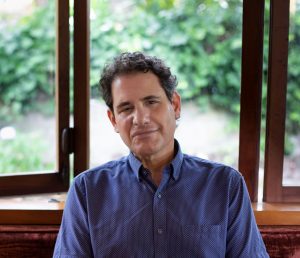 Bryan Walpert is the author of four collections of poetry, most recently Brass Band to Follow (Otago University Press), listed among the 10 best poetry collections of 2021 by the NZ Listener. He is also the author of three books of fiction, most recently Late Sonata, winner of the 2020 Seizure Viva La Novella Award (Brio Books, Sydney) and the novel Entanglement (Mākaro Press), named a best book of 2021 in the Listener and shortlisted for the 2022 Ockham New Zealand Book Awards. He has written two scholarly books about poetry. Bryan is a Professor in creative writing at Massey University in Auckland.

Walpert comments: 'I drove my son through Auckland traffic every day during his last few years of primary school, a period when we were new to the city. Though the traffic could be grueling, our conversations were always interesting, surprising, and funny. His perceptive questions could require such concentrated attention that I occasionally missed a turn. He rides his bike to school now, and I miss that time, which as anticipated passed too quickly. As for infinities, Georg Cantor really did demonstrate that one infinity can be larger than another.'