a mosquito has come up the bank
and bitten you, and the stream

is in your bloodstream. You buff
the site of entry like a trophy.

Your chuckling new acquaintance
takes your cells out to the sea.

*
It goes all night, you tell your friends
drinking wine to warm the house

(already warm), and laugh of course
like a drain. Later in your roomy

queen you listen to its monologue –
ascending plane that never reaches

altitude. Your fingers stretch
from coast to coast to try it out,

this solitude, while water thumps
through the riverbed.

*
You’re not exactly on your own.
Teenagers come and go, the screen-door

clacks, cardinals mob a little temple
hanging in a tree. A neighbour with a bag

of seeds asks you if you mind
the birds. There is that film, and the flu,

but no. In the mornings earlyish
you slide the rippling trees across

*
At sunset a rant about the dishes –
you’ve worked all day, unlike

some people! The tap runs. The sun,
tumbling over Waikiki, shoots through

the trees, gilds the stream (unnecessary),
stuns you in the empty room. Every day

for ten years (you realise, standing there)
you’ve crossed the bridge etched Mānoa

Stream, 1972, back and forth,
except the day the river rose.

*
Some facts: mongooses (sic) (introduced)
pee into the current, plus rats and mice,

the stream is sick. All the streams.
Mosquitoes – your messengers and those

like you, and you will go your whole life
and only die at the end of it.

*
The stream doesn’t look sick. It takes
a pretty kink near your apartment.

in a gallery (mixed media). The water
masks its illness like a European noble

with the plague – a patina, and ringlets.
You’re pissed about the health issues

of the stream, and healthcare, because
it has your blood, you have its H₂O.

*
You think it’s peaceful by the stream?
Ducks rage, waking you at 2am,

or thereabouts. Mongooses hunt
the duck eggs, says your son. Ah, you say.

That night the quacks are noisy, but
you fret in peace. Sometimes homeless

people sleep down by the river bank.
Harmless. One time one guy had a knife.

They still talk about it and you see him
ghostly like an app against the trees.

*
All your things are near the stream,
beds, plates, lamps – you’re camping

apart from walls and taps and electricity.
Your laptop angles like a spade,

and clods of English warm the room
(already warm). They warm your heart.

Overall you have much less, because
of course – divided up. But you’re lucky

or would be if the stream was squeaky
clean, and talked to you.

*
The stream had caused a little trouble
in the past, i.e., the flood. Not its fault.

down the valley taking cars, chairs, trees.
You saw a mother and her baby rescued

from a van – a swimming coach, with ropes –
the van then bumbled out to sea.

*
One apartment in your complex
took in water in the flood. And mud. It was

this apartment. You’ve known it all along,
of course, because you watched.

They fixed it up. Lifted carpets, blasted
fans for a week. Repainted.

though, on the wall, a watermark,
the stream’s dappled monogram.

*
You’re talking clichés – water under
the bridge, love letter from a lawyer,

serious harm, sunk without you.
The stream has been into your bedroom,

and you in its. Remember reeds, coolness,
summer afternoons. You loved

the stream. Its stinging waters send
a last message in lemon juice:

fevered me, infected,
flooded me.

If I’m fucked,
you’re coming with me. 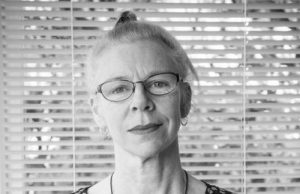 Anne Kennedy is a poet, fiction writer, screenplay editor and teacher. Recent books are The Ice Shelf (Victoria University Press, 2018), Moth Hour (Auckland University Press, 2019) and The Sea Walks into a Wall (AUP, 2021) which has been shortlisted for the Mary and Peter Biggs Award for Poetry in the 2022 Ockham New Zealand Book Awards. Awards and fellowships include the 2021 Prime Minister's Award for Literary Achievement, the Montana NZ Book Award for Poetry, and the IIML Writers' Residency. Anne has taught creative writing at the University of Hawai`i and Manukau Institute of Technology. She lives in Auckland.

Kennedy comments: 'As with all true stories, "Flood Monologue" is partly true. We really did live in an apartment that had taken in water in the 2006 Oahu (Hawai`i) flood, and we’d lived through the flood in another apartment and had to evacuate. That flood changed me forever; it gave me a respect for the terrifying power of nature. (The previous occasion of extreme weather I’d witnessed was the Wahine storm, but I was only eight.) The reason for the flood was well-documented at the time: unprecedented rains coupled with Oahu becoming increasingly built-up, so there was nowhere for a deluge to go. In the poem, I wanted to set down the idea of how powerless we are, or will be, when nature inserts itself into our little lives. So on a formal level, I guess I was going for babbling-brook effect, order (it’s quite a neat-and-tidy poem for me), a certain witless denial – in contrast to what’s really going on.'